WEB MAIL
Good things are happening...we are upgrading our network to provide faster internet speeds to better serve you. For more information click here.
Be one of the first in your community.
Apply for priority service today!

How it all Works

Our network provides high speed Internet to residents, businesses, and community groups located in rural areas where service was previously unavailable. In terms of geographic area, ours is one of the largest fixed wireless Internet services in the world. This network was built under the joint partnership of Seaside Wireless, federal, and provincial governments during the Broadband for Rural Nova Scotia (BRNS) project.

Running cables to each of our customers spread widely over a large geographic area would be prohibitively expensive. Instead, we use a network of 330 towers, equipped with 1,500 radios that communicate back and forth to radios installed at our customers’ homes or businesses.

Our towers range from 42-meter composite structures supported by guy wires to 14.6-meter wooden utility poles. Each tower holds up to sixteen access points (APs)—radios equipped with directional antennas that communicate with subscriber modules (SMs) at our customers’ locations.

The towers connect to one another by radio links known as backhauls, and then to a fiber-optic backbone that runs through Cape Breton and northern Nova Scotia. Our backbone, in turn, connects directly to Canada's premier Internet hub in Toronto.

The subscriber modules (SMs) at our customers’ locations include a small radio transmitter with a directional antenna or small dish that communicates with the AP on one of our towers.

Some of the challenges involved in operating a radio-based Internet system include occasional extreme weather; physical obstructions like hills, buildings, and foliage; interference from other radio signals; the need to transmit over long distances; and surfaces that reflect or distort radio signals, such as metal roofs and the Bay of Fundy’s enormous tides.

Seaside Wireless uses various strategies to overcome these challenges. Our radios use GPS time synchronization to reduce signal interference, and advanced encryption to prevent eavesdropping. We supplement the 900 MHz radios around which the BRNS project was designed with radios of different frequencies better suited to penetrating foliage or long distance transmission.

Currently, our standard speed is up to 1.5 Mbps for downloading, up to 0.5 Mbps for uploading. This is anywhere from 25 to 60 times faster than rural dialup.

Now that our network is in place, Seaside is determined to narrow the urban-rural digital divide by improving the speed and reliability of rural Internet service. We believe fixed wireless technology is the future for high speed Internet in rural Canada. 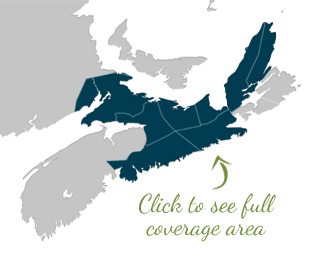 Please enter a code below to receive a discount.

You have entered an incorrect code, please try again.

If you are an existing Seaside customer, or wish to become a new one, please fill out the following form.

Use this form if you are interested in upgrading your current services. Please select "existing customer" below, then fill out your contact information and select the upgraded Wireless Internet Speed that is applicable to you. Feel free to provide any additional comments in the space provided. You will be placed on our list for an immediate upgrade once available in your area.

Use this form to sign up for new services. Please select "new customer" below, then fill out your contact information and select the Wireless Internet Speed that is applicable to you. Feel free to provide any additional comments in the space provided. You will be placed on our list for immediate installation.


New Customers (outside of service areas)

Use this form to express interest in new services. Please select "new customer" below, then fill out your contact information and select the Wireless Internet Speed that is applicable to you. Feel free to provide any additional comments in the space provided. You will be placed on a priority list and notified once Wireless Internet becomes available within your community.


For more information, please phone 1-888-965-5511 and ask to speak with one of our customer services representatives.